The purpose of this page is to describe common issues with DotVVM for Visual Studio along with their troubleshooting guide. 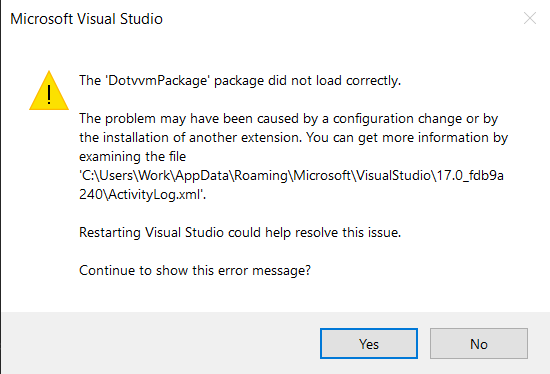 Some time ago, we decided to include compatibility information for every released DotVVM for Visual Studio Extension. This can be found on our release notes. There is a list of all extension releases with download links, changelogs and most importantly, compability info. You want to ensure that you have installed a compatible extension version for your Visual Studio. For example:

In order to minimize or even completely avoid potential problems with compatibility, set up automatic updates for Visual Studio Extension for DotVVM. You can turn this on in Extensions / Manage Extensions / Installed / DotVVM for Visual Studio xxxx dialog. There should be a checkbox -- "Automatically update this extension". Then whenever there is an update, you can should also update you Visual Studio. This approach ensures that you are always running latest and compatible software both from DotVVM Team and from Microsoft.

If your extension still does not load, it sometimes helps to delete the MEF component cache. In order to delete the cache, shut down Visual Studio and go to %localappdata%\Microsoft\VisualStudio\17.0 and delete the whole ComponentModelCache folder. You don't have to worry too much about it, Visual Studio will recreate it during the next startup.

Extension loads but does not work correctly

The second category of issues describe situations where the extension has been successfully loaded, however, user is experiencing issues with some of its basic features (e.g. IntelliSense is not working).

1. Ensure you are using compatible extension

One of the root causes of random bugs and basic functionality not working correctly is incompability. Therefore, before continuing, ensure that you are running compatible DotVVM Extension and Visual Studio.

2. Check that you are signed in

"DotVVM.Compiler.exe not found in the project"

If you open a DotVVM project in Visual Studio, sometimes you can see the yellow bar with the following error message:

Also, IntelliSense in DOTHTML files is broken, the directives are being underlined etc.

Visual Studio uses the DotVVM Compiler to read the settings in the DotvvmStartup file, or to precompile the DOTVVM views.

How to resolve the issue

The most common reason for this behavior is that Visual Studio cannot find the DotVVM binaries, because they are not present in the packages folder.

You can resolve this simply by building the solution. In the default settings, the Visual Studio runs the NuGet package restore before the build, and this operation downloads missing NuGet packages. The DotVVM package contains the DotVVM Compiler binary.

If the package restore doesn't help, you can look at the Output window in the Visual Studio. If you display the output from DotVVM, you'll see the exception the compiler has returned, and the stack trace. Maybe you can figure out what's wrong from the exception - it can be caused by something you have used in the DotvvmStartup.cs. Please, keep in mind, that the DotVVM for Visual Studio has to actually execute the DotvvmStartup.cs to be able to retrieve the configuration data.

If the issue still occurs, contact us and provide us with description of the problem and screenshots.