Modernize ASP.NET
Web Forms apps and move them to .NET 7 without
rewriting everything

DotVVM is a free and open-source framework for ASP.NET. It lets you create web apps using the MVVM pattern, with just C# and HTML. It is an alternative to ASP.NET Web Forms or ASP.NET MVC.

There is no need to build a new app from scratch, deal with single sign-on, session, caching, and sharing data between the two apps.

Choose your own tempo

DotVVM can run in the same app with other ASP.NET frameworks. You can add new features or fix issues while replacing the old pages one by one.

In DotVVM, you can access the data the same way as before. No need to build APIs to access data on the client.

Refactor and improve your codebase

Modernizing is an opportunity for refactoring and cleaning up your code. Thanks to the MVVM pattern, it's easy to cover all pages with tests.

DotVVM offers a unique way to modernize legacy ASP.NET applications without the need to rewrite everything. It is possible to install DotVVM in the current application and start replacing ASPX pages with their DotVVM equivalents one by one.

The application can be deployed at any point of time during the modernization process. The team doesn't need to replace all the pages in one big release - they can deliver new features while modernizing. 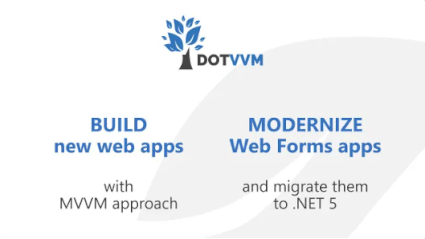 After some time, when all artifacts which depend on ASP.NET Web Forms are replaced, the project can be switched to the latest version of .NET and benefit from all the new features on the platform.

If you use this method, the only files that to be rewritten are ASPX pages, ASCX controls, and their corresponding code behind files. All the business logic, data access, integrations, and other code can remain without significant changes.

The modernization is also an opportunity to clean up and refactor the code-base, and thanks to the MVVM nature of DotVVM, the pages may be covered with integration tests.

DotVVM allows your current team to continuosly improve your existing application and remove the technological debt. After the modernization is complete, the developers will be able to benefit from all new features and enhancements brought by .NET 7.

When total rewrite is not an option

We have seen many legacy applications that are difficult or even impossible to rewrite.

It would take years to re-build these applications from scratch using modern frameworks and technologies.
The only way to replace such application completely is to hire a new team and wait months until they rediscover and rewrite all business logic, and migrate data to the new system.

In the meantime, a lot of work would have to be done twice because the old application would still need to be maintained and extended with new features.

Modernize your application with DotVVM

How to start Get DotVVM Migration Cheat-sheet

Boost your productivity with the ultimate tools.
Explore our products and find out how they save you hours of your time.

Not sure if DotVVM is the best good choice for you?

We'll be happy to talk with you and see whether DotVVM can help in your scenario.

Contact us How to start Book an online meeting